The History of T-shirts

The History of T-shirts began it’s journey as an undergarment used in the 19th century known as a one piece union suit originally worn by miners and labor man. By the Great Depression, the T-shirt was often warn to do farm work but following World War II, Navy men started wearing the t-shirt as a casual outfit with uniform trousers. A fashion statement is born. 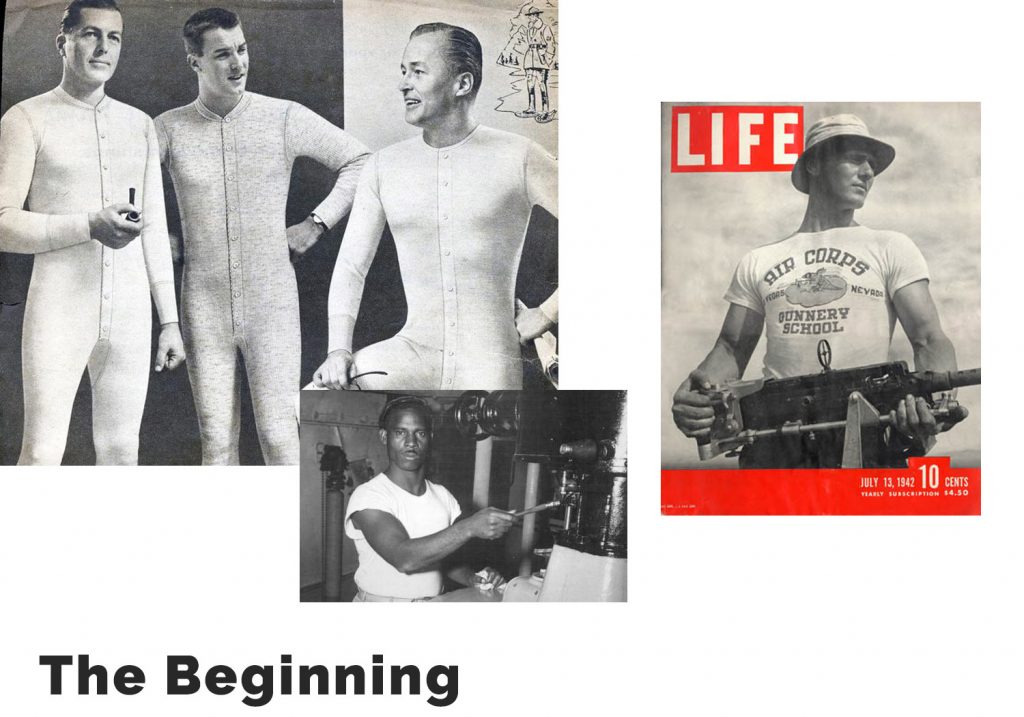 The history of t-shirts begin to take a cool, understated look. Cinema bad boys such as Marlon Brando and James Dean personify the rebel without a cause look by making the classic t-shirt with a rolled up  sleeve and cigarette pack an iconic statement of the lone rambler. 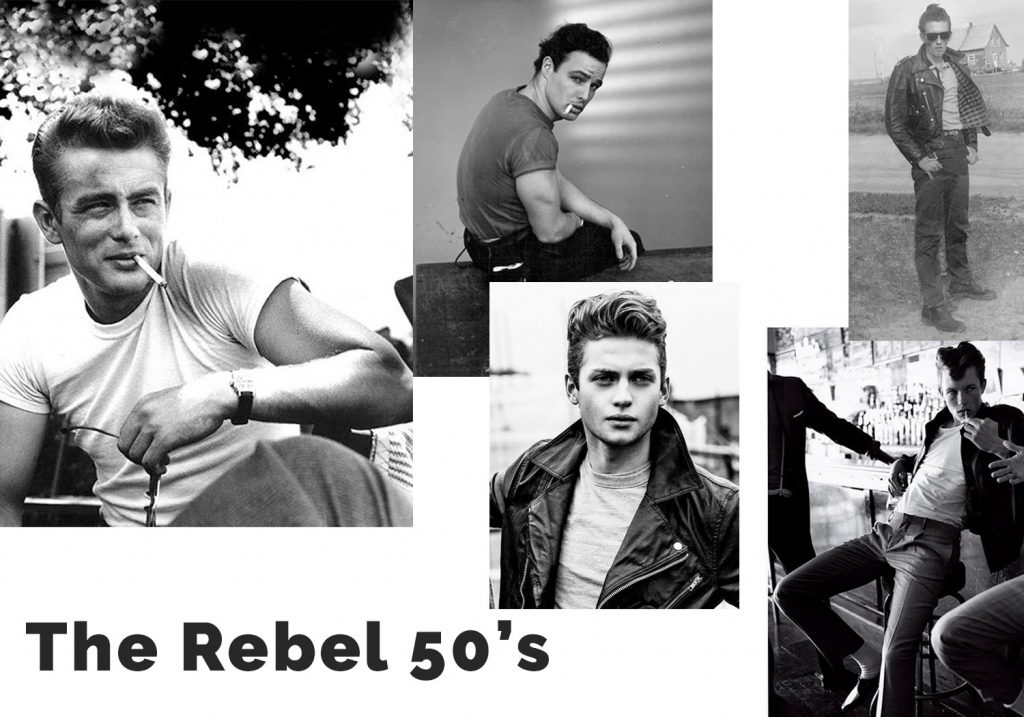 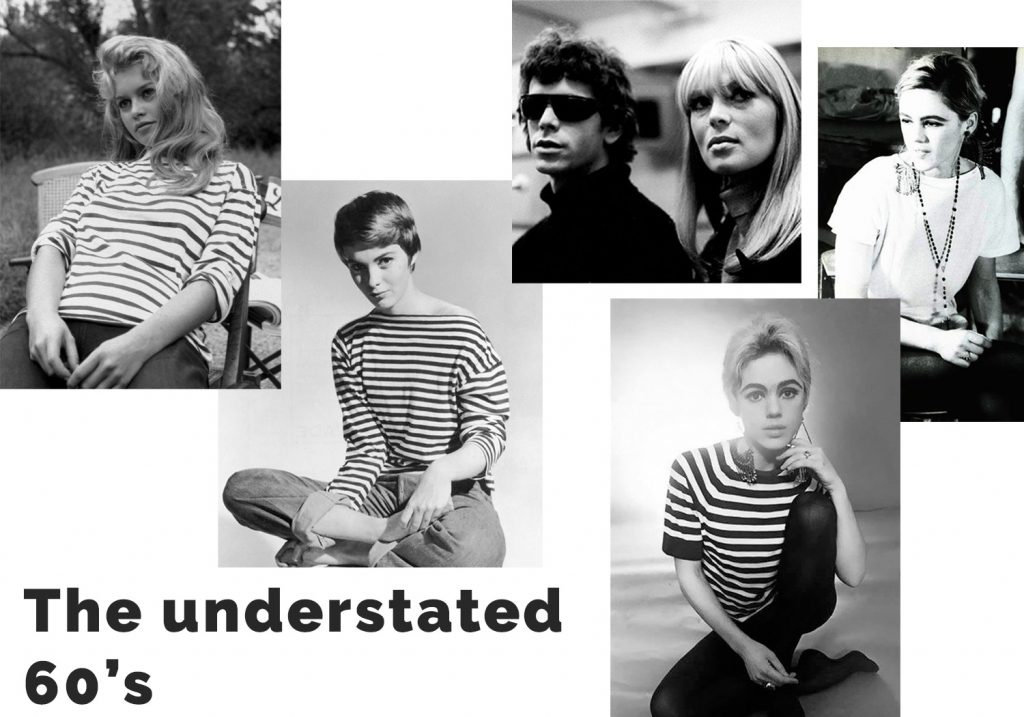 This irreverence for conventional-ism also gave rise to the Beatnik Community from San Francisco to Greenwich Village, New York from the late 1940’s to the mid-60’s.

The Beatnik uniform consisted of an understated striped t-shirt, beret and black sunglasses which morphed into the deep underground Andy Warhol, Factory scene circa NYC mid-60’s.

The Velvet Underground+ Nico & Edie Sedgewich  rubbed t-shirt sleeves with all the cool art kids of the gritty New York scene of the 60’s.

During this time, we see the British Invasion and mod taking over the runway’s of London. Bold printed t-shirts and psychedelic prints becomes both fashion and a political statement. 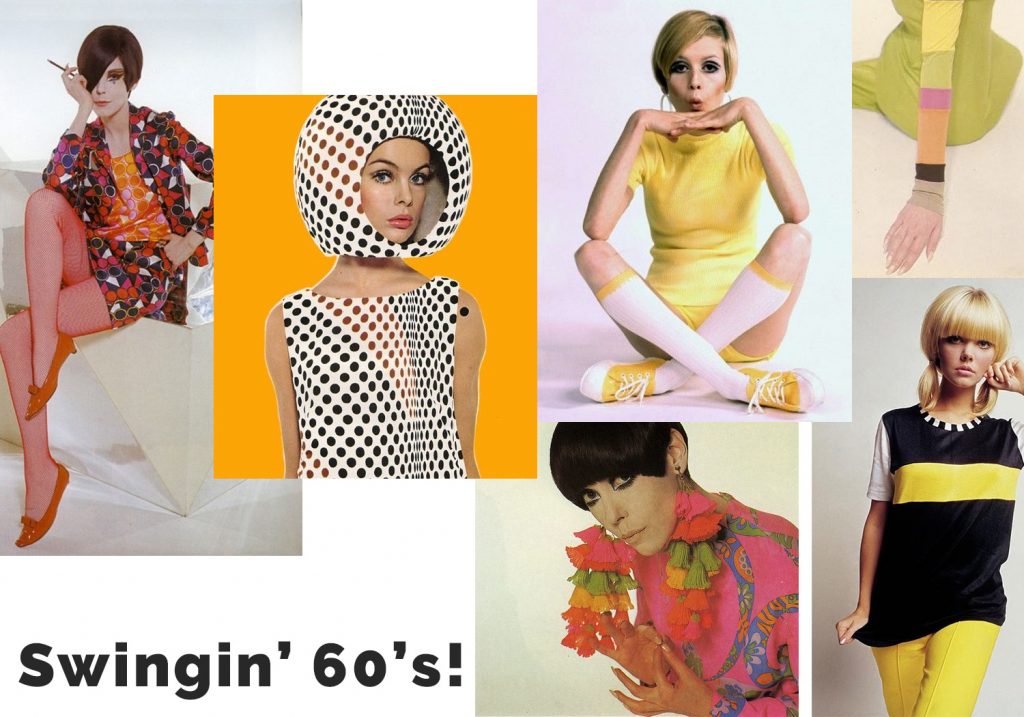 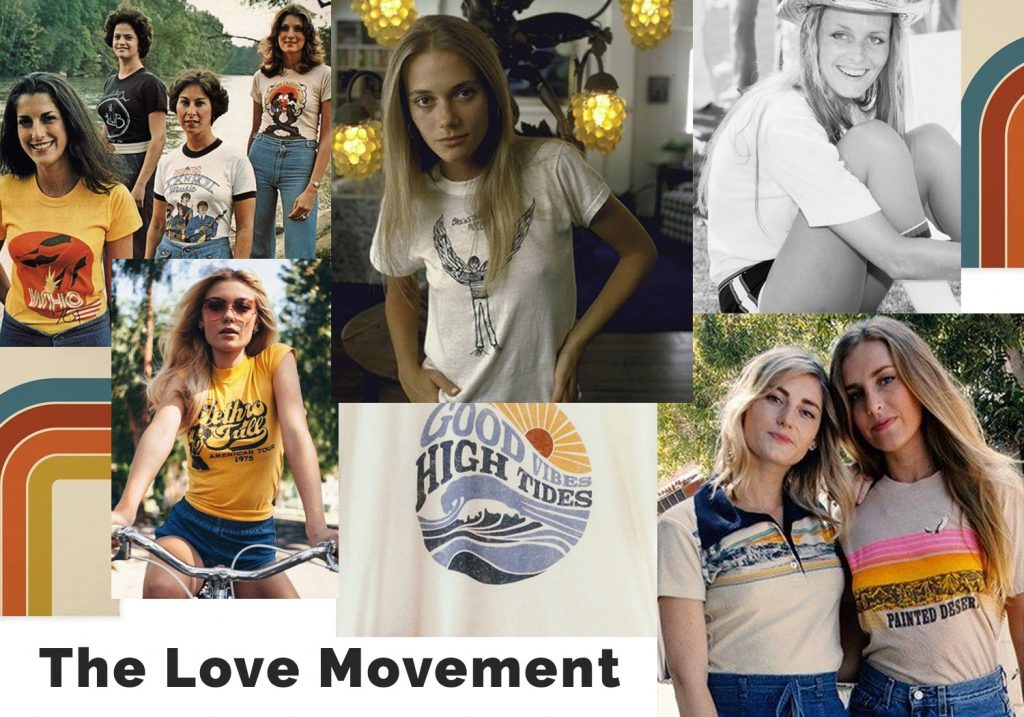 The band tee became immortalized from Woodstock to the Monterey festival of 67’ as young music lovers felt a communion between fellow concert goers.

By the late 70’s punk rock began to hit the streets of London. DIY t-shirts with scribbled Sharpie text and safety pins gave way to the new rebellion. 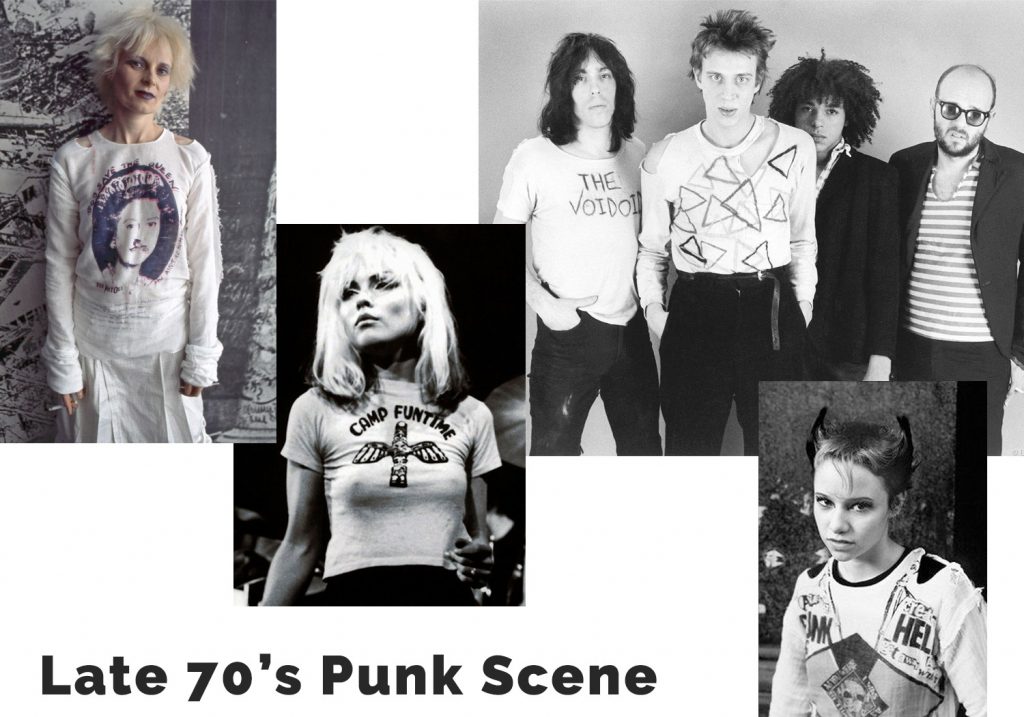 Bands like Blondie and the Talking Heads blurred the lines from the gritty stages of CBGB to disco exuberance at Studio 54.

By the 80’s, pop-modern artists Keith Haring & Jean Michel Basquiat bring their paintings to the masses with POP-Inspired tee’s while Madonna creates a cult-like following of  girls wearing oversized t-shirts with  cinched belts. 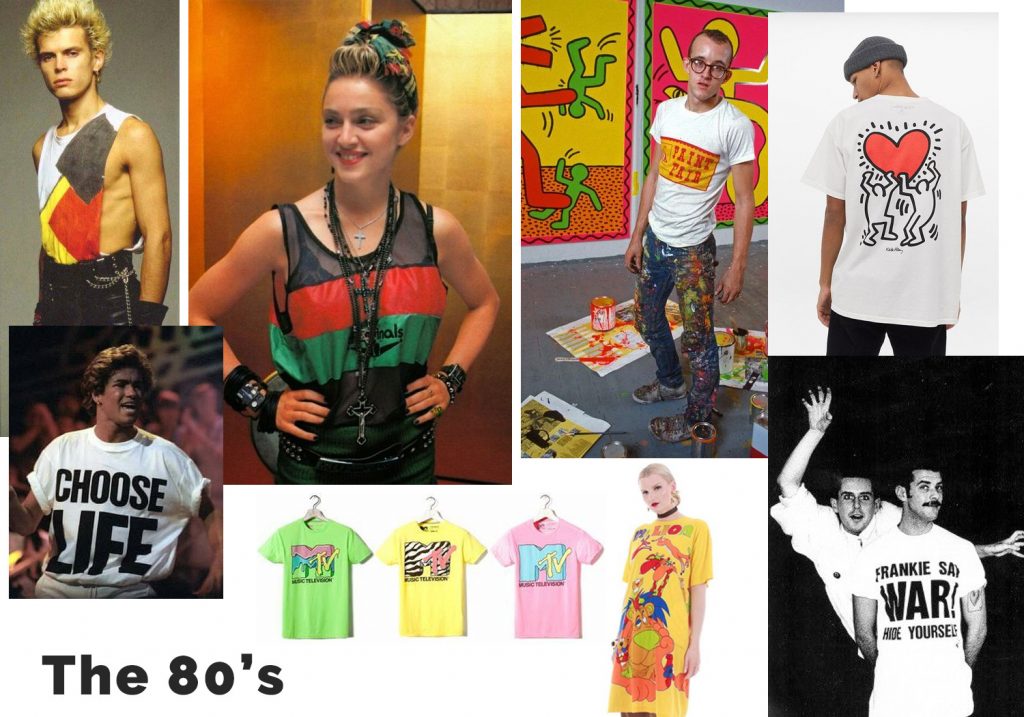 We can’t talk tee’s without talkin’ WHAM! The oversized ARTPOP Choose Life Tee is synonymous with the 80’s.

What does a group of 90’s super models and a Hypercolor t-shirt have in common? They ruled the 90’s!

T-shirts get experimental during this time from mood-ring like t-shirts that changed colors and designs to 3-d and puff paint surrealism. 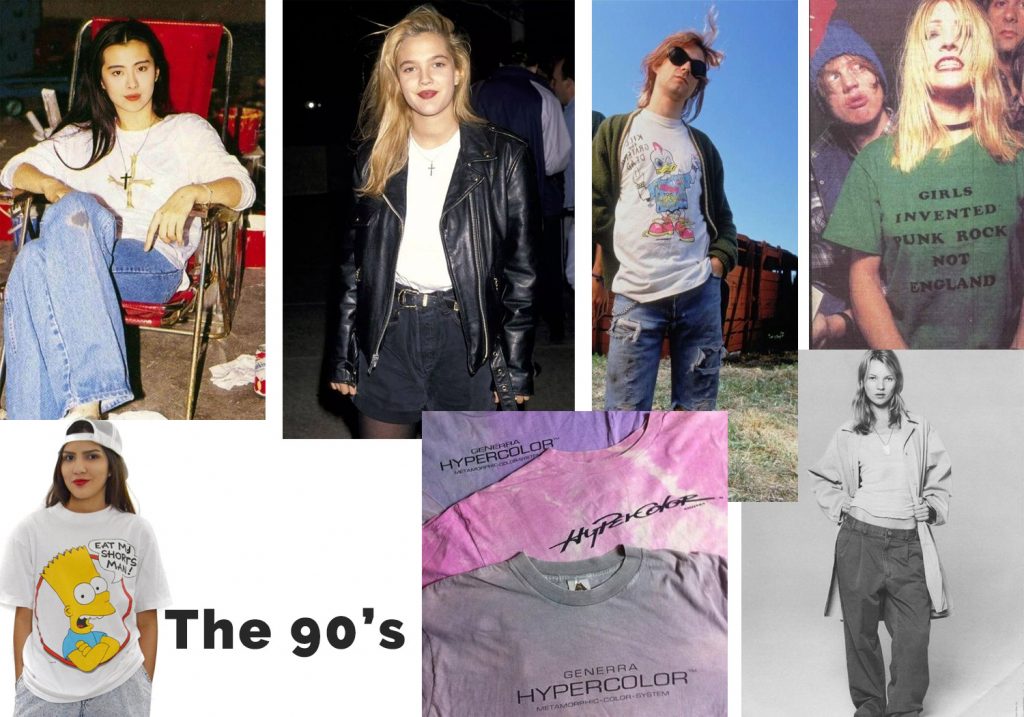 By the mid to late 90’s Calvin Klein campaigns, super models and grunge made minimalist t-shirts a thing again. Consumers traded in their Bedazzlers and puff paint for a basic white Calvin Klein tee. Fashion influences during the 90’s were a young Kate Moss, Cindy Crawford and the modern-day James Dean, Luke Perry. Grunge created a revival of the DIY-punk t-shirt with little effort being the key to a cool tee!

By the 2000’s, Pop culture really influenced the t-shirt industry. From Ed Hardy, Fubu, boy and girl bands, the 2000’s brought back the exuberance of the 1980’s but now with a modern/urban spin. We saw rhinestones and pyramid studs layered on top of distressed imagery. A fashion time some people may want to forget but it definitely wasn’t a boring time for the t-shirt!

The History of T-shirts: Currently Trending

What’s interesting about the present-day t-shirt is that there is literally something for everyone.

Looking for an original vintage Led Zeppelin t-shirt from the 70’s? You’ll find them selling for several hundred dollars on EBay or Etsy. Want to re-create a t-shirt for a modern-day audience? We’ll that’s easy too.

It’s the t-shirt era of the Something for Everyone. T-shirt blends, colors, fit and occasion are all easily and readily available. We’ve even perfected that slightly pre-shrunk worn-in t-shirt look minus the hefty “original-vintage” price-tag. It’s less about the “trend of the moment” and more about buying a t-shirt to fit a lifestyle.

The innovation of sustainability within the t-shirt industry continues to fascinate us here are B-BAM! What used to be considered impossible just a few short years ago, are now paving the way for a greener future. Whether we’re talking t-shirts made from fast growing hemp or entirely of recycled plastic or cotton, B-BAM! Continues to work with vendors that are on the forefront of ecological manufacturing.

We’ve seen a lot of trends in the History of T-shirts, but the sky is truly the limit and we will continue to see innovation unfold. Maybe the future brings AI compatibility or t-shirts made entirely from IPAD to 3-D printing. Whatever the case, Seattle Screen Printing will offer the latest and greatest t-shirts on the market because that is what we do! We are known for our robust selection of t-shirts and apparel, so you’ll never feel stifled by limitation when working with us!

Have a t-shirt question? Talk to one of our T-shirt Guru’s!